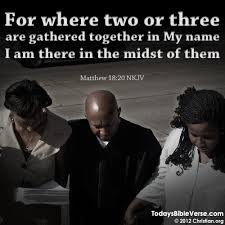 "And we have a mandate from God to assemble and to gather together and to keep doing what we're doing."

Hebrew 10:25
Not forsaking the assembling of ourselves together, as the manner of some is; but exhorting one another: and so much the more, as ye see the day approaching.q
What's the BIBLICAL definition of "assembling"? Glad you asked:

Matthew 18:20
For where TWO OR THREE are gathered together in my name, there am I in the midst of them.
"Pastor" Spell supposedly 1,000!!! I would say they ARE under a spell!
Literally every Christian family
already sheltered in could hold bible study or meetings! THAT'S THE SCRIPTURAL MANDATE! Discover the Lord's mandate FOR YOURSELF and stop letting these busters lie to you, peddling the word of God for profit!
2Corinthians 2:17
For we are not as many, which corrupt the word of God: but as of sincerity, but as of God, in the sight of God speak we in Christ.
I don't believe a pre trib rapture to be biblical nor scriptural. I think that doctrine is the second worse doctrinal belief that's supported as biblical doctrine, eternal security being the worst false doctrine).

One argument frequently given in the face of lack of scripture goes: "there is no "church" mentioned in the book of Revelation, that's proof of the rapture."

And It's always said so smuggly with an "in your face" look...lol.

This is stupid for so many reasons. Not least of which, scripture more than once places the rapture, (or catching away)after the tribulation period (I have cited scripture for this many times before. I will post the link at some other time).

Secondly, scripture also tells us the individual Spirit filled Christian believer is the temple of the Holy Spirit thereby the church.

Thirdly, in light of Covid-19, we can see an example playing out right in our lifetime and before our eyes, how "traditional" brick and mortar churches would not be congregating, making it  entirely plausible why we don't read about the "church".